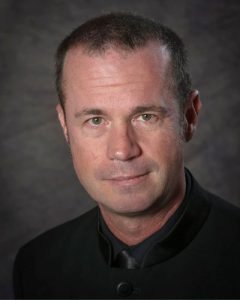 Elliot Jones holds degrees from New York University, Indiana University, and a Doctor of Musical Arts degree in Choral Conducting from the University of Arizona. He has conducted performances of a wide variety of repertoire, including many works for chorus and orchestra such as Mozart’s Requiem, Haydn’s Lord Nelson Mass, Honegger’s King David, and Handel’s Israel in Egypt. He has twice led performances at the National Cathedral in Washington, most recently of Gregorio Allegri’s iconic work, Miserere. A passionate advocate for new music, Dr. Jones conducted the East-Coast premiere of Jake Heggie’s Anna Madrigal Remembers (text by Armistead Maupin), scored for mezzo-soprano, men’s chorus, strings and piano. In June 2007, he was honored with tributes from Ruth Ann Minner, Governor of Delaware, and James M. Baker, Mayor of Wilmington, in recognition of ten years of leadership of community choirs.

Dr. Jones served on the music faculty at West Chester University of Pennsylvania, Wesley College, Culver-Stockton College, The Music School of Delaware, and Saint Andrew’s School. In 1996 he was selected for the prestigious National Association of Teachers of Singing (NATS) Intern Program at Ohio State University, and has enjoyed an unusually rich education in the vocal arts, having been exposed to the teaching of such vocal pedagogy luminaries as Margaret Harshaw, Giorgio Tozzi, Virginia Zeani, and Shirlee Emmons. He brings this experience to the singers with whom he works, and as a result, was recently featured on National Public Radio/Arizona Public Media. His students regularly win prestigious vocal competitions, and have appeared with such performing arts organizations as the New York Gilbert and Sullivan Players, the Cincinnati Pops Orchestra, the Tucson Symphony, and Opera Delaware.

Dr. Jones is active as a clinician, guest conductor and adjudicator, and has held regional leadership positions in the American Choral Directors Association (ACDA). Elliot regularly reviews new books on choral music for the ACDA Choral Journal, and his dissertation on choral settings of metaphysical poetry by Gerald Finzi was nominated for the ACDA Julius Herford Prize for outstanding doctoral terminal research project in choral music for 2010. The Arizona Daily Star and Tucson Weekly have described his ensemble’s performances as “powerful,” “outstanding,” and “chill-inducing.”

“I enjoy working with the skillful and dedicated singers of ARS to create innovative and beautiful choral music programs that bring new life to the classics. I’m also hoping that we will come to be known as the ensemble that is leading Arizona in new choral music.”